24 years ago this month, it was to a six-week sublet near what used to be the edge of downtown (why in the world I’m still here is another story.)  I enjoyed the location, near a couple of restaurants and coffee shops, and next to a school that presented me with the unfamiliar sounds of children playing.  There was a moonlight tower on the corner that shone directly through a window onto my bed at night;  my periods got all out of whack until I rigged a black-out curtain, after which I started to miss the permanent moonlight.  I walked regularly to my local health food store, a place called Whole Foods.  I was low-level horrified that they sold meat; not the case at Integral Yoga Natural Foods in NYC, where I’d worked for awhile during college, enjoying the staff discounts for groceries, smoothies and yoga.  Whole Foods had just moved from its original location next to a gas station in a flood zone to a nice shopping center with a book store and I don’t remember what else.  There was a studio on the second floor where I studied Sufi mystical dance with a woman named Dunya.  I was into tarot and got goose bumps when I learned that her name meant “The World”.

Sometimes I drove to the shopping center, if I were on my way to or from somewhere farther away.  In Austin in general, I was struck by how many cars sported bumper stickers; I’d never lived anywhere that had such a culture of automobile decor as self-expression.   I remember pulling out of that particular parking lot behind an especially bedazzled vehicle ( the rule still seems to hold that the shittier the car the more likely to have stickers, and more shitty among the shit, the more stickers likely to be had).  It was then that the idea came to me to get a bumper sticker made that said, “Ask Me About My Abortion”.

I loved this flash of inspiration.  I’d never had a bumper sticker.  I drove an old blue Mazda, so I had right raw material to work with, and it felt authentic to me as an artist to fabricate my own message.  I wanted to be inclusive, to bridge gaps, to start conversations.  To empower women.  To shine light into dark places, like the tower had done to my bedroom.  For me, the statement had the right mix of sass, humor and sincerity.  It felt provocative yet authentic.

But then I started to realize it might not be such a hot idea.  BBQ at the health food store, guns and Republicans just past the city limits (a new friend took me to the rodeo; he might have taken me to Mars).   Slapping that on the back of your car would be a good way to get your tires slashed, the New Yorker in me rationally positioned.  Or worse, the dubious stranger-in-a-strange-land in me replied.

Years passed, decades passed, yet I am really fucking tenacious when it comes to ideas.  Maybe this has to do with being a 5 on the Enneagram.  For years I gingerly unfolded emptied and dried hundreds of tea bags; it was perhaps ten years later that I got around to using them as part of an art project called The Dendochronology of Domestic Destruction (or something like that).   I still have the left overs in a  shoe box, waiting for another project.   This very blog I began in 2012, abandoned for several years, and voila now it’s risen from the dead.  After my second divorce, the event that inspired the DDD series, I revisited the “Ask Me” idea.  A t-shirt, I thought.  It should be something personal, worn on a body.

Ask me about my abortion.

A t-shirt….  might be asking for a gunshot wound.  I could always carry a vest to throw on over it…. but still.

Finally I settled on a baseball cap.  Easy to remove in a hurry.  This was pre-MAGA; I chose the red white and blue as a funny yet simple aesthetic statement.  I had several made, as I was certain they would be in high demand.  I did give one to an acquaintance as we met over lunch to discuss a business idea.  I hadn’t brought it for her, I was just wearing it myself, but she admired it so I let her take it home.  For most of our lunch it sat on the table off to the side next to a window overlooking the restaurant’s patio.  A cluster of gay men sat down outdoors, and began enthusiastically rapping the window, pointing to the cap, and giving us the thumbs up.

I rarely wear the cap.  Often I end up at an event and wish I’d brought it along, but it’s there in my pajama drawer, a reminder every time I see it of both my intention to create dialogue and the difficulty of following through on that intention.

so far, I think, that I’ve ever received came from a man a bit older than me, I’d put him 60-ish. He’s a badass yogi who comes to my classes pretty often with his gorgeous wife, girlfriend, lover… they have different last names yet seem dedicated to each other, qualities I appreciate.

“I have the weirdest thoughts when I listen to your voice with my eyes closed,” he said after class recently.  Yikes? Wait-

“Today I thought:  this is how I want to die. I want to take ayahuasca in a hospice and listen to you talk me through to the other side.”

with my neighborhood.  A much loved neighborhood, not hard to love, but hard for me to love, because I’ve been investing all my energy in wishing to be elsewhere.  Far.

Tonight I walked my dog in the temperate mist, hazy moonlight pressing through clouds. The streets were quiet but not dead.

The alleys are magical.

I was able to procure a well-made baguette at a shop where the clerks greeted me warmly by name, gave me a discount even, because my son worked there for a minute last fall.

The air on that block always smells amazing thanks to the bakery across the street.  Always cinnamon, always sweet.

Passing the firehouse, a small group approached from the opposite direction; two couples, two children.  I noticed the children first as they ran ahead laughing, twirling shirtless in leggings and rain boots.

Are you Abigail?  The younger of the men asked me.  I’m Andy Brown, he said.  Jingle Ball, Club de Ville and all that.

I remembered him immediately and even recognized his wife Sara(h?) who I’ve met exactly once, about 7-8 years ago.  Isn’t it weird what we keep?

You’re not alone; we’ve all been wondering.  Find out here: http://www.defenestrationmag.net/2020/01/what-should-i-wear-to-the-revolution-by-abigail-king/

RAR accepted my poem “Call in the Ents”, and shortlisted it for their Charles Bukowski Poetry Prize!

Unlike most, I came to Bukoswki not via Ham on Rye (that followed soon enough) but rather Hollywood, recommended by a film professor I admired.  She was Chinese, with a soothing accent and a down-to-earth glamour that included casual name drops (“I was talking to Wim on the phone the other night…..  Bianca was over, we were sharing a pizza…”).

In high school I’d stumbled upon the Warhol Diaries and was instantly hooked.  The combo of catty gossip, weird details about daily food intake, and high art was somehow irresistible.   Marty and Liza appearing on his doorstep all coked up after he’d arrived home via taxi ($5.70) and was ready for bed…  too delicious.

Warhol died his existentially sickening hospital accident death the same year the film “Barfly” came out.  I was a big Faye Dunaway* fan and especially loved her in this one for being “old,” drunk in a way that women weren’t really supposed to be, and not always pretty.   Hollywood came into my life soon after, contextualizing the film and a perfect fit to fill the lonely gap left by the Diaries.

It took me down the Bukowski rabbit hole; eventually I plowed through most of his fiction (those satisfyingly thick paper covers, a bit expensive, but worth saving for or seeking out second hand) and landed on his poetry.

This is one of the pages I’d at some point dog-eared from  Love is a Dog From Hell.  The circumstances long escape me, and the book itself was hard to locate on my shelf.

It was stacked rather randomly between Kafka/Calvino and a three-channel video installation I’d made in the early 90’s called There’s a Last Time for Everything, title taken from a series of cautionary billboards along the highway between Vegas and the Hoover Dam.  Further complicating things, that part of the shelf was hidden behind this framed 8×10 photo of my parents (unmarried at the time but enmeshed  in a longterm , Mad Men-style secretary-boss affair) at Coney Island in 1959, ten years before I was born. 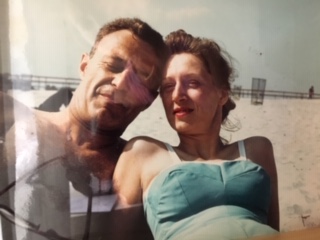 By coincidence, “there’s a last time for everything” reappears in my “Ents” poem, though not by accident.  I think about those billboards quite a lot.

*Mickey Rourke, not so much, though he was inarguably great in Barfly.  I met him once at a club in NYC; he was shifty and sketchy.  I was hanging out with a friend/potential boyfriend; a rich, socially plugged-in black kid — a film school connection?  He was taking a meeting with Mickey in a green room and brought me along (via limo with champagne), trying to impress each of us, I imagine.  I was having none of it.

While dreaming of a road trip to the Pacific Ocean, I made it only as far as West Texas.  But you know how it goes: you can’t always get what you want, but if you try sometimes, you get what you need.

I glamped, I camped, I made myself jump off the high dive at Balmorhea (terrifying for a height wimp like myself).  I climbed the highest mountain in Texas.  I drove through ranch land recently purchased by Jeff Bezos to use as the base for his space stuff. I shot billiards at a matriarchal dive in Van Horn.

I worked out some new yoga sequences to teach.

Ghost City Press published my micro-chapbook Airplane Poems as part of their Summer Series 2017. Cover by me!  Olive in the martini was an accidental wax stain; here’s to happy accidents.

Also check out the Best Review Ever, by Beach Sloth.